Create an Account - Increase your productivity, customize your experience, and engage in information you care about.

The Westford Fire Department has always honored the hard work and sacrifices made by its members and family members throughout the department's 100+ years of dedicated service to the Town of Westford and surrounding communities. Over the years, many members have gone above and beyond their duties in community service activities for the Department and the Town. Many members have been injured while performing their duty, some seriously 2 members have given all; sacrificing their lives in the Line of Duty. The Department honors all of our members, whether they be Career, on-Call or Retired and thank them for their dedication, loyalty, and service to the Department and the citizens of Westford. 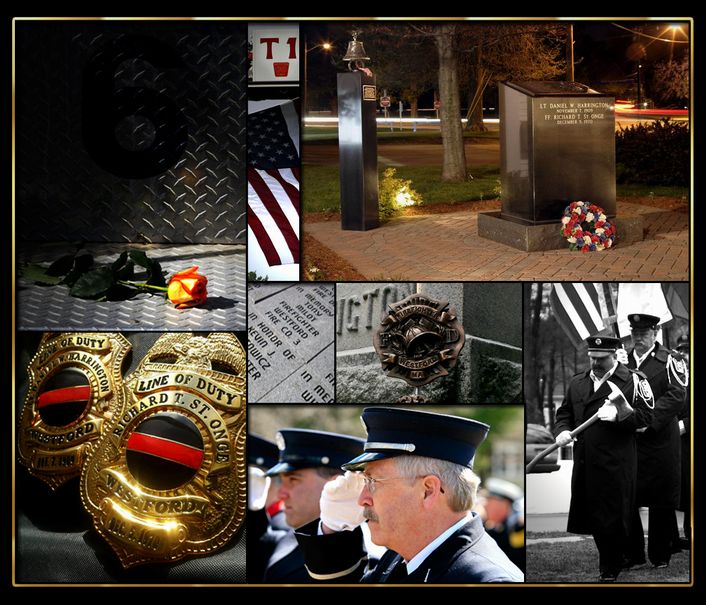 Fletcher Granite of Westford acquired the Black Granite and worked the stone to David's design. Much of the site preparation work was done by David and fellow Firefighter James Lamy. Al Garside of Garside Granite in Westford helped them form and pour the footing that would support the large granite block. Ideal Block of Westford graciously donated paving stones to match the existing ones in the courtyard and donated the cost of installation and labor.

The monument installation was completed in May of 2002, done by Westford Firefighters working with Al Garside. Lighting was installed by Firefighter David Devincentis and Joseph DelPapa. The monument is made of black granite and has the names of FF. Richard T. St. Onge of Westford Center and Lt. Daniel W Harrington of Graniteville. Even though 61 years separated their sacrifice, both died in the Line of Duty at the age of 29 years old and both died battling barn fires, leaving their families behind.

A bronze plaque tops the granite with a beautiful poem and a relief sculpture of a firefighter carrying his fellow firefighter. A separate black granite post stands off to the side, with a bronze bell and a plaque dedicated to all members of the Department; past, present and future. Every Memorial Day, Westford's Military Veterans donate a Memorial Wreath for our Firefighters to lay at the Monument and salute the sacrifice made by our members. The Bell is also used during the 9-11 Memorial Service each September 11th.
Meeting Agendas
Meeting Minutes
Meeting Packets
Pay & Look Up Bills
Notify Me®
Property Lookup
[]